1. Island of the dolls in Mexico 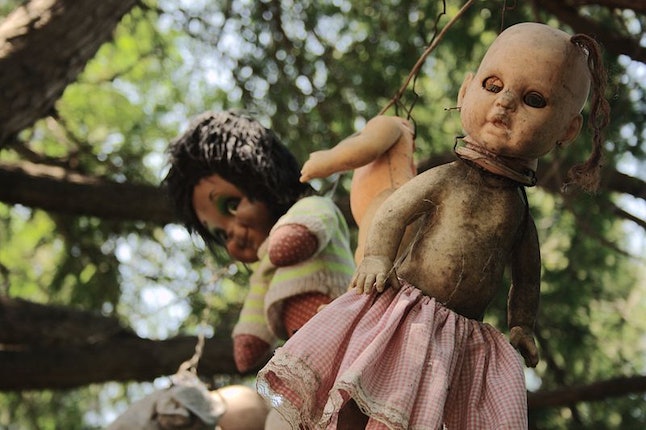 Legend has it the island’s caretaker, Don Julian Santana Barrera, found the body of a drowned girl and later a doll, which he hung from a tree on the island as a sign of respect. Santana continued to hang dolls until his death, giving the island a creepy sort of foliage. 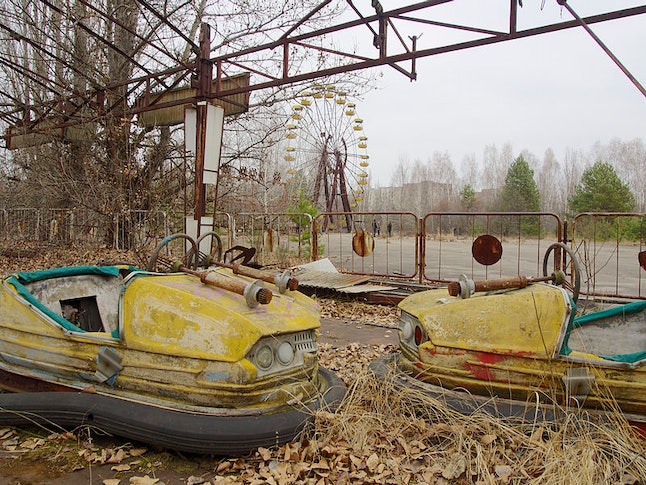 The residents of Pripyat were quickly evacuated from their homes following an explosion at the nearby Chernobyl Nuclear Power Plant in 1986. Airborne radioactive particles make the town uninhabitable while nature and time are slowly leveling the abandoned structures. 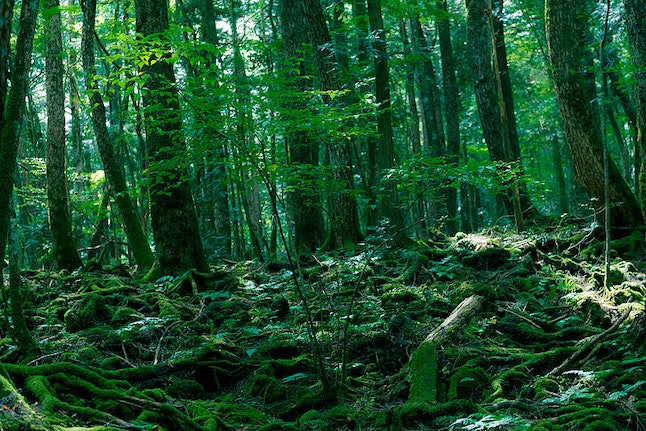 At the base of Mt. Fuji lies Aokigahara, a forest that has inexplicably drawn more than 500 people to commit suicide within it since the 1950s.

4. George’s Church in the Czech Republic 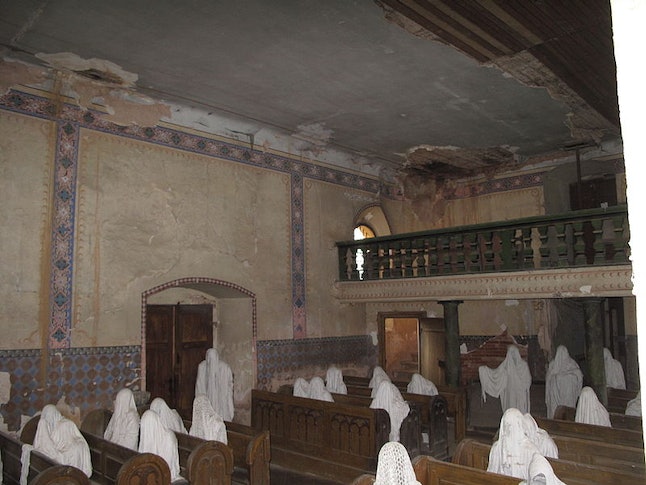 Abandoned after suffering some structural damage in 1968, this church is made creepier still by the addition of shrouded “ghost sculptures” by artist Jakub Hadrava. 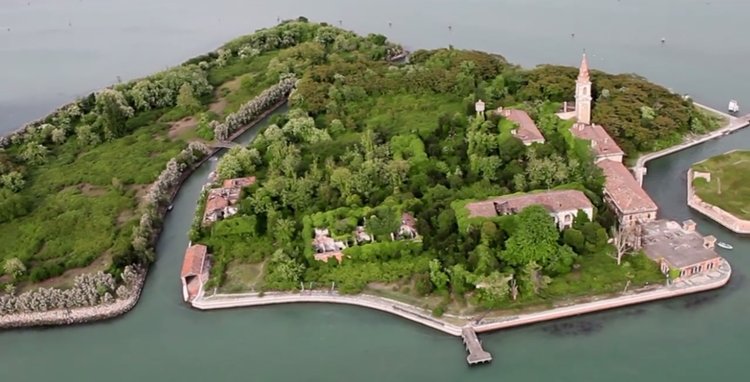 The small Italian island of Poveglia goes by another, more sinister name: Plague Island. From 1793 to 1814 the island was used as a place to quarantine those with the plague. Mass graves can still be found there today. Consider this the creepiest place on Earth—for your dog. The bridge at Overtoun House in Scotland is known more commonly as the “dog suicide bridge.” Although researchers aren’t 100 percent sure why, 600 dogs are estimated to have jumped from the bridge to their death since the 1960s. 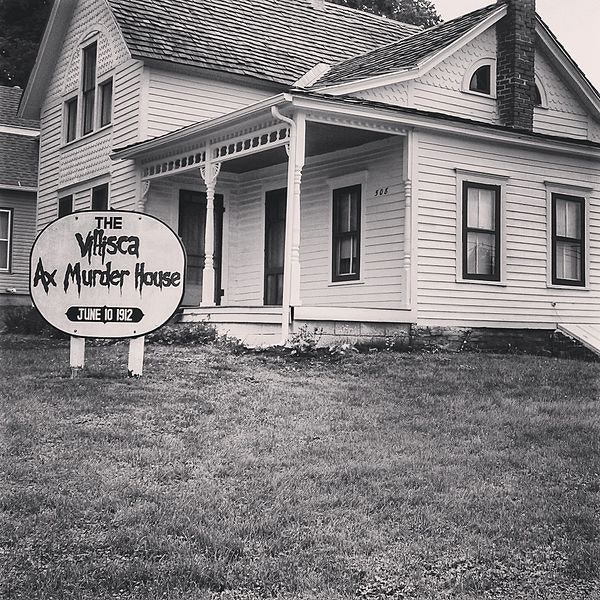 It’s the gruesome history behind this house that makes visiting a hair-raising experience. In 1912, Josiah and Sarah Moore were brutally murdered with an ax along with their four children and the visiting Stillinger sisters. Before leaving, the murderer draped each victim’s face with a cloth and covered all the mirrors in the house. 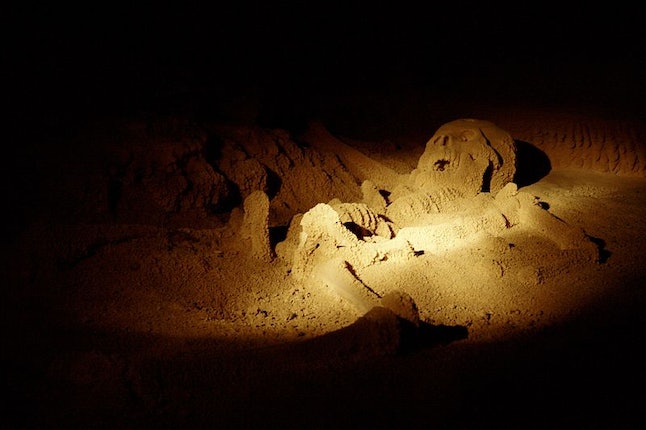 Inside this cave lies the skeletal remains of 14 people, all reportedly killed by some kind of blunt force trauma to the head. It is believed those left in the cave were sacrificed to Mayan gods. What’s even more creepy? Roughly half of the remains belong to children and many of them have become calcified over time, giving them a crystal-like appearance. 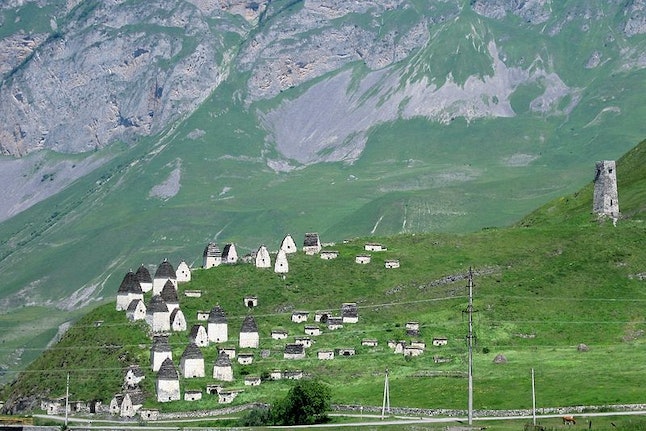 Although Dargavs may look like a small village nestled into the hillside, it’s actually a series of tiny crypts, which is why it’s referred to as the “City of the Dead.” Each crypt contains not only skeletal remains but also the belongings of the deceased.

Located in Romania’s famed Transylvania region, Hoia Baciu Forest is known worldwide as “The Bermuda Triangle of Transylvania.” There are many rumors regarding exactly just what (or who) resides within the trees of Hoia Baciu. Some say it’s the spirits of murdered villagers, others have claimed to have spotted UFOs. While many believe those who enter risk never leaving, those who’ve trekked the forest and lived to tell about it have reported suffering from unexplained physical symptoms like scratches, burns and nausea

Known as one of the most haunted places on the East Coast of the United States, St. Albans Sanatorium offers guided tours to those brave enough to walk its halls. The building operated as a school for boys from 1892 to 1911 before being turned into an asylum for the mentally disabled, where experimental treatments (think electroconvulsive therapy) took place. Historical records show multiple suicides occurred at the sanatorium and one room is known as “the suicide bathroom.” Considered one of the most haunted castles in the world, Ireland’s Leap Castle saw more than a few brutal atrocities in its centuries of history and is rumored to be home to many spirits. With rooms like “the bloody chapel,” where a priest was said to have been murdered during mass, it’s not hard to see how the castle could have come to be haunted.

13. The Door to Hell in Turkmenistan 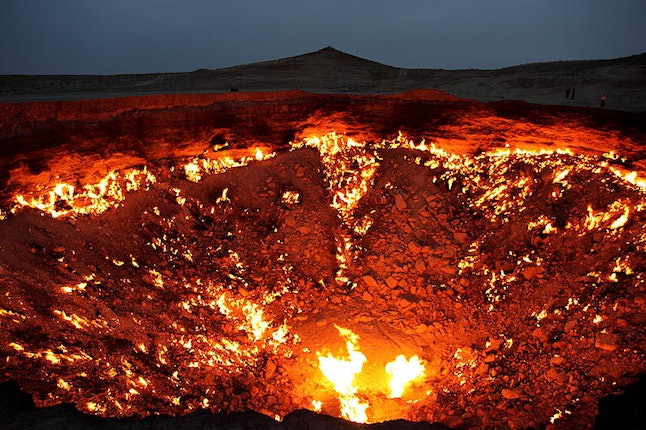 The Door to Hell lies in the Karakum Desert and looks just as ominous as its name sounds. Soviet geologists drilling for natural gas reserves uncovered the crater of methane gas in 1971. They set it on fire in an attempt to burn the hazardous gas away and protect nearby villages. However, fueled by a seemingly unending supply of gas, the flames have been continuously burning for 45 years.

Perhaps what makes the now-abandoned Takakonuma Greenland Amusement Parkso creepy is how little is known about it. The park was reportedly shut down in 1975, just two years after opening. It reopened in 1986 but closed again in 1999 and now lies abandoned to the surrounding forest. 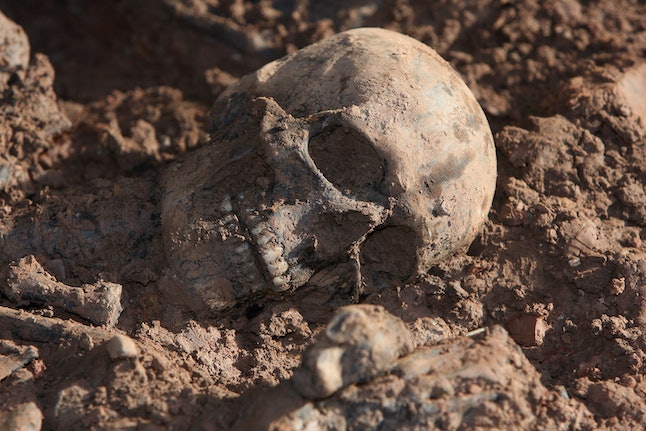 Nothing says sinister like mass cannibalism. In 2009, German archeologists uncovered a mass grave at Herxheim with bones that reportedly dated back 7,000 years. However, marks consistent with skinning and chewing appear on many of the bones along with evidence marrow was sucked from the bone.

16. Building No. 25 at Creedmoor Psychiatric Center in New York

Once a state hospital for the mentally disabled, the history of Creedmore Psychiatric Center is littered with cases of patient abuse, neglect, suicide and rampant crime. While some of the center’s buildings have been sold or are still in use, others, like building 25, lie abandoned. But it’s not abandonment that makes building 25 creepy, it’s what decided to move in when the psychiatric center moved out. Pigeons have taken over building 25, leaving behind massive mounds of guano to give the structure an otherworldly look.

In Baja California Sur, Mexico, a walk on the beach may mean a close encounter with a skeleton. Residents first began spotting skeletal remains on El Conchalito beach in the early 1980s. An archeological investigation found the beach was once used as a graveyard by ancient nomads. The remains are sometimes painted red and reburied for later discovery. 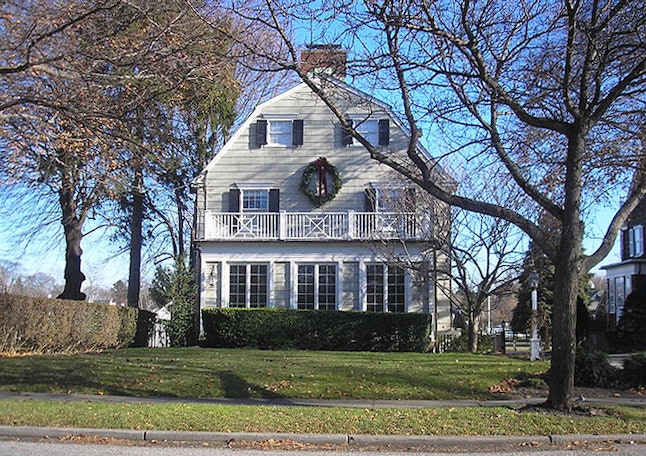 The Amityville Horror House is well-known for having inspired both a book and a series of films. Even if Hollywood embellished the story, the history of the Amityville House remains a frightening tale. In 1974 Ronald DeFoe shot and killed all six members of his family within the house. The home’s next owners, George and Kathy Lutz, reported being harassed by paranormal spirits while living in the home a year later. Did the home drive DeFoe to murder? Or did DeFoe’s victims turn the home into a house of horrors? 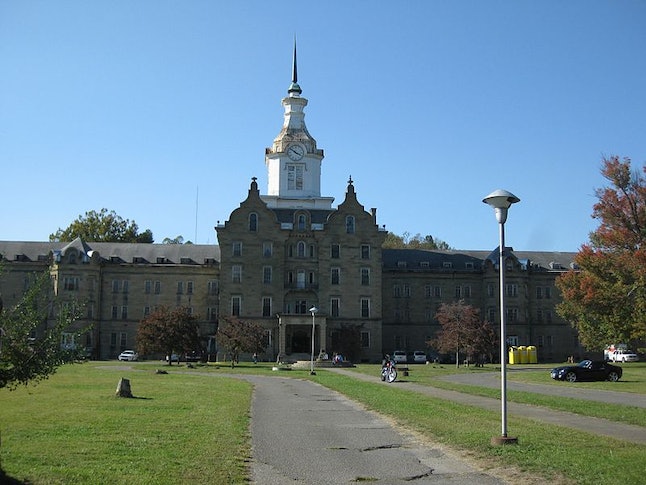 Featured on Ghost Hunters and Ghost Adventures, the Trans-Allegheny Lunatic Asylum operated from 1864 to 1994 and is home to quite a few documented reports of paranormal activity. Overcrowding and poor living conditions plagued the hospital throughout much of its history and may have contributed to its eventual closure. 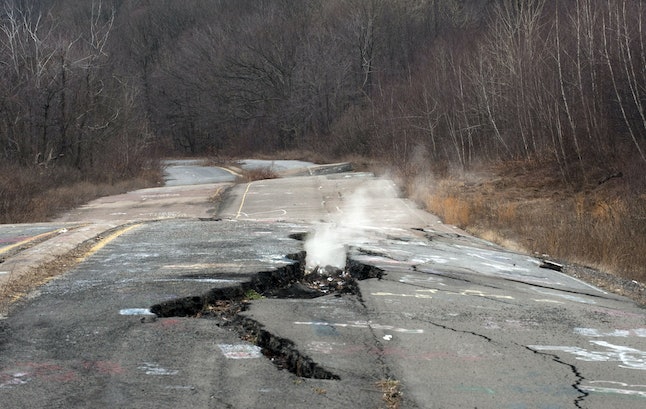 Anyone courageous enough to enter the now abandoned mining town of Centralia is greeted by a sign warning of death by asphyxiation or simply being swallowed whole by the ground. Once home to a population of more than 1,000, coal veins under the town caught fire in 1962 and have been burning ever since. Despite the U.S. government declaring the town uninhabitable due to the fire’s carbon monoxide fumes, 10 residents have reportedly refused to move. Some say Centralia inspired the film Silent Hill.